One such example is the white temple and ziggurat in Uruk (modern Warka), in Iraq… 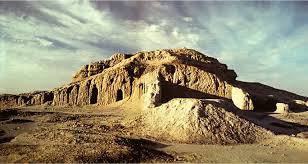 The temple is named after its whitewashed walls and it stands atop a ziggurat, a high platform. Using only mud bricks, the Sumerians were able to build large-scale ziggurats for their temples long before the Egyptians erected their great pyramids. I think this says a lot about just how big of a role religion played in their lives and just how much of a sacrifice they were willing to make. Sumerians wanted to create monumental and elaborate settings to worship their gods. Like many other ziggurats found, the four corners of the white temple and ziggurat are oriented to the four directions of a compass.

Scholars speculate that the temple was most likely dedicated to Anu, the sky god. Some art historians believe that only priests and the leading members of the community were allowed to enter the temple, since the size of the temple indicates that it could not have accommodated huge groups of worshippers (the population of Sumer during this time was around 40,000). The temple has several chambers. In the cella, the central room of the temple which was dedicated to  divinity, a stepped altar was found.

Whenever I learn about ancient art, I am amazed. I am taken away by the complexity of the artworks and by the fact that they were able to accomplish such huge tasks. Although I wish we could see the structure in its entirety (ziggurat and temple), I am still very impressed by the ziggurat.