Mesopotamians have been revolutionary in many ways. They developed complex societies based on sedentary agriculture, conducted trade with their neighbors, built massive temples, and were the first to depict narratives in their works of art, among other things. Another one of their major achievements in art is hollow-casting life-size statues. Mesopotamians are credited with the earliest known great monumental work of hollow-cast sculpture. It was the sculpture of an Akkadian ruler… 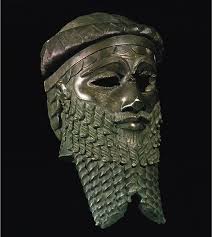 Where is the rest of its body? What happened to the ruler’s eyes? This is what I asked when I first saw this sculpture. Well to answer those questions, the head is all that survives of the statue today because it was destroyed in antiquity, quite possibly when the Medes, a group of people who occupied land south of the Caspian Sea, sacked Nineveh in 612 BCE. However, there are also signs of intentional destruction. Apparently, as a symbol of their political authority and dominance, the Medes gauged out the eyes of the Akkadian ruler (which were supposedly inlaid with precious stones), broke off the lower parts of his beard, and slashed off his ears! How cruel! However, I am somewhat relieved to know that the Medes did this to a sculpture, and not the king himself… at least I hope they didn’t do this to the king himself!

Nonetheless, I think even the remnants attest to the qualities of the Akkadian ruler and to the skill of the artist. In this sculpture, the artist balances naturalism and abstract patterning in a very creative way. The ruler’s nose and beard are depicted realistically with ample detail. Through naturalism, the artist also brilliantly depicts the varying textures between the ruler’s flesh and hair and even between the mustache, beard, and braided hair on his head. The artist used geometric shapes, such as triangles in the hair, lozenges in the hairdo, and overlapping discs of hair in his portrait of this Akkadian ruler.

Working together, the stylistic effects say a great deal about the Akkadian ruler. He is depicted as majestic, serene, dignified, and authoritative. The different techniques employed by the artist give the work and the portrait much more character as well.

Although I find that the anecdote about the Medes gauging the ruler’s eyes is somewhat gruesome, I still really like this work of art. I think it really displays the artist’s mastery of his artistic skills, which work together to create the portrayal of the ruler. And no less remarkable is the fact that this was a life-size hollow-cast sculpture!