Statues similar to the one of enthroned Khafre can be found in other pyramids. Some are standing, and some are of two people. One example is the double portrait of Menkaure and one of his wives, most like Khamerernebty. 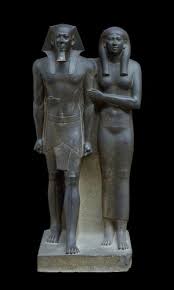 This statue was originally found in Menkaure’s pyramid, which like Khafre’s, is also located among the complex of pyramids with the Sphinx. In this statue, like the statue of Khafre, the figures are attached to the stone block from which they were carved. In fact, this sculpture can even be classified as a high relief sculpture. Menkaure, on the left, is in a typical stance position. His arms hang straight down, his fists are clenched with thumbs forward, his left foot is slightly in front of his right foot, and his torso is straight as he looks straight ahead of him. This pose is seen often throughout Egyptian art and has influenced art from other cultures as well. Menkaure’s wife, Khamerernebty, stands in a similar position. However, her right hand wraps around the pharaoh’s back, while her left hand is gently placed on his left arm. This indicates that the couple is married. Other than this, the two show no other form of affection or emotion and do not even look at each other. Both figures are also depicted in a very idealized manner (for the same reason that Khafre was).

Like the statue of Khafre enthroned, the goal of the artist is not to portray living beings, but rather to suggest the eternity of the stone statue that was meant to preserve the ka during the pharaoh’s afterlife.

I think this statue is very interesting as well. Although it is made of a different material than Khafre’s statue (this statue is made with greywacke stone while Khafre’s is made with diorite stone), it still has the same effect of peacefulness and eternity. I think that it must have been very difficult to carve such a “relief” statue and then smoothen the surfaces. Thus, I am quite impressed.