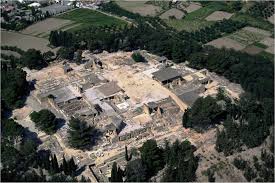 The Palace of Knossos is the largest palace found on the island of Crete. It is supposedly where the legendary king Minos lived. In the legend, a Minotaur lived in the palace. The hero, Theseus, was able to defeat the Minotaur and found his way out of the labyrinth with the help of King Minos’ daughter, Ariadne. She had given him thread to mark his path. To find his way out of the maze, Theseus simply had to follow the string and retrace his steps. (In fact, the English word labyrinth derives from the maze-like plan and multitude of rooms found in the palace of Knossos. Labrys means “double ax”, referring to the recurring motif in King Minos’ palace representing sacrificial slaughter. Thus labyrinth means “the House of the Double Axes”.)

The palace of Knossos is a huge structure located on top of a hill. Surrounding the palace are villas and mansions where lived the Minoan elite. The palace is intricately designed, with the central court and corridors serving as the major organizing elements in the floor plan. On the west side of the court, a north-south corridor separates official and ceremonial rooms from the storage rooms for grain, wine, oil, and honey. On the east side of the court, an east-west corridor separates administrative areas from the work rooms. The palace also includes a theater like area, which may have been a possible inspiration for the Greek theater that came later.

The location of the palace of Knossos makes its design very complex. The south and east sides of the hill’s terrain slope off sharply, complicating palace’s architecture.

The interior design of the palace is well-planned as well. There are lights and air wells with staircases in the palace that illuminate and ventilate the palace. Minoan builders also dealt with issues such as the drainage of water. To deal with this issue, at Knossos, there is an efficient system of terra cotta pipes underneath the palace.

I am so amazed at the grandeur of the palace as well as its intricacies in its architectural design. I think such a palace was quite fitting for the legendary King Minos.