While some artists seem to have an artistic calling at a young age, this was not the case for Henri Matisse. He grew up in a small town in northern France, where his father was a grain merchant. Matisse then moved to Paris to study law and as a young adult, he worked as a clerk for a solicitor. He took drawing lessons on the side. However, later in 1889, Matisse began painting during his recovery from appendicitis.

He loved painting and began to take it seriously. He attended the prestigious school of art, Académie Julian and worked in the studio of a well-respected artist, William-Adolphe Bouguereau. Later on, he also worked with Gustave Moreau. Throughout his career, Matisse was highly inspired by artists such as Jean-Siméon Chardin, Jean-Baptiste-Camille Corot, John Peter Russell, Claude Monet, Vincent van Gogh, J. M. W. Turner, and Paul Cézanne.

Henri Matisse is best known as the leader of a new, modern, avant-garde style: Fauvism. The group of painters in Paris included Henri Matisse, André Derain, Georges Braque (Braque later became involved in Cubism with Pablo Picasso), and Raoul Dufy. The painting style of Fauvism is best known for their use of color to emphasize emotions rather than in a manner that was imitative of nature.

The name for this style was actually the result of a critic. The group of artists showed their works together at the Salon d’Automne in 1905. Louis Vauxcelles, a critic, attacked the artists, dismissively calling them fauves, which is French for wild beasts. However, the name stuck and became the name of the short-lived painting style. Below are a couple examples of paintings by Fauvist artists… 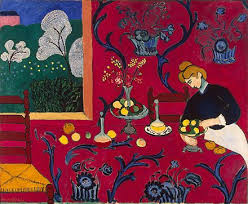